Here’s how I make fudge. Basically, you take the fats and sugars, add some kind of taste and then boil it until it’s done. Then you add the chocolate.

Here are the ingredients:

The flavoring can and will vary. So far I’ve tried the following things: 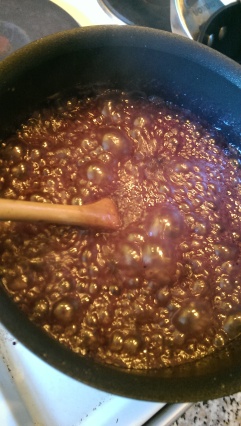 Depending on how much of the flavoring you have, and what kind of flavoring it is, you can adjust the amount of chocolate added at the end.

Word of warning: If you’re using some kind of candy, like the Turkish pepper, be careful with the boiling as it’s easier to get it overcooked and the whole thing will caramelize, and then you’ll have a horrible time getting it out of the pot.

It’s possible to layer fudge, if you want to try and make something fancy looking. Just make one batch at a time and pour the second batch on top of the first one.

As mentioned above, pour the fat and sugar and flavoring in a pot, bring it to a boil and let it boil/simmer until it’s done.

How do you know when it’s done?

Technically you can get a thermometer and boil until the mixture reaches the right temperature, which is somewhere between 110 and 120 degrees C. Personally, I haven’t bothered getting a thermometer but have used the Soft Ball test instead.

To perform the test, take some of the boiling mix and pour it into a tub of cold water. Leave it a second or two and then try and pick up the mix from the water. If you can pick it up and shape it into a glob (ball), then you’re done. Before I tried it the first time I watched this video that someone made for it:

At the start of the video they mention that they like to keep the water in the freezer to make it extra cold. It may be better, but I haven’t bothered. You can use cold water from the tap just fine. The water doesn’t go into the mix so it doesn’t affect the flavoring.

Also, you’ll probably be doing the test numerous times (because it’s a good way to get to taste the mix), and it’s nice to be able to see the drops you’re trying to pick up.

Once the mix passes the soft ball test it’s done.

If you pour the mix into the water and it forms into a ball on its own, you’re definitely done. At this stage you’ll get a fudge that’s closer to toffee. It’s a bit chewy, but not in a bad way. If you keep going you’ll risk getting it all caramelized though, and then you’ll need a chisel and hammer just to get the mix out of the pot.

Take the pot off the heat and keep stirring until it stops boiling. This is supposed to keep the mix from sticking to the pot. 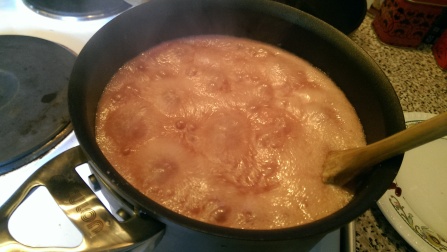 Now, break up the chocolate into small pieces and drop them in the mix. It’ll still be hot enough that the chocolate will melt almost right away. Keep stirring until you have a smooth mix.

Pour into a pan to cool.

If you want to make the fudge more fluffy, whip it in a water bath. First, pour the mix into a bowl. Then lower the bowl into cold water (some kind of basin will do) and take to the mix with an electric whisker. This will cool down the mix quickly and the whisking will keep it from going solid too fast – or something like that.

Soon, you’ll see how the mix changes consistency and then it’s time to pour it into a pan and leave it to cool off.

When you do this, do not use the kitchen sink. You’ll run the risk of electrocuting yourself and that would be bad. Use a bigger bowl or a washbasin of some kind.