I didn’t mean to go walking today. Last night I felt like it, and I looked up what bus to take and when it left and everything, and then I checked the weather. The weather report told me to stay home – except in different words. On top of that my friend C advised me to stay home, drink coffee, and eat nice food.

So in the end I decided not to go, and I didn’t get up early to take the first bus to Dripsey as I’d planned. I stayed in bed, rolled over and went back to sleep.

Then, when I eventually got out of bed and headed out to get a coffee and do a bit of writing, I discovered that there wasn’t any rainstorm going on, and after some less than careful decision making I decided to take the mid-day bus and go walking anyway. After all, I wore my rainproof jacket and I’d just bought a pair of rainproof trousers to wear over my regular ones just for this kind of thing.

On the bus to Dripsey the rain showed up 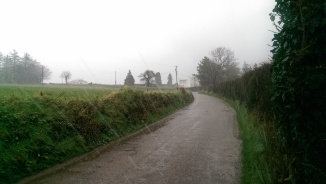 I’m really happy the rainproofs held up. I got a bit cold when stopping to take pictures, but I stayed dry through it all.

After a little over an hour I reached my first stop, Blair’s Inn. I’d also planned on stopping at Angler’s Rest, but once I got there I was tired enough I just wanted to get home (and then I ended up not taking the shortest route anyway, because of traffic) so this was the only real break during the walk.

While I sat there, waiting for my coffee (and a bowl of soup, which was nice but a little too warm – or I was too hungry), I noticed that the rain stopped. Sunlight peeked in through the windows. The rest of the walk would be nice.

Two minutes after I stepped out of the pub it was raining again.

It was also at about this time that my feet started to ache. I bought new boots last week, and I’m trying to break them in. They’d been fine so far, and I had no issues with them yesterday. Not sure why they were acting up now. I tried untying and retying them a few times but it didn’t really help any. There wasn’t much to do but keep going and hope I got used to it.

The pain wasn’t unbearable, and my main concern was that my walking step would change in some unnatural way in order to compensate for it, rather than that my feet would take any serious damage. In the end I seem to have gotten home fine, and I took care to stretch properly so hopefully there won’t be any niggling issues from this.

Also, the sun showed up again.

Okay, so I may have gotten a little bit carried away there, but it’s a lot more fun taking pictures of bright sunny hillsides than dull grey rain.

In the end, despite the rain and wind and hail, and despite my aching feet and tired legs, I’m happy I went. It was a great day on the road, but the next time C tells me to stay home and drink coffee I’ll pay more attention to that. It’s good advice too.