Edit: Scroll down for recipe.

The other day I made fudge. 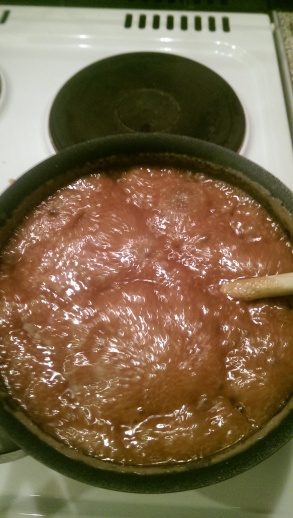 It turned out really well and and my colleagues at work consumed the entire batch before the end of the day.

I’d over-estimated how much cream I needed though, and I had way too much left over. I didn’t feel too happy about throwing out an entire pint’s worth of cream, so I decided to try to bake something else.

The fudge had been fairly stable, and I got the idea of using it as the base for a cheesecake – instead of the cookie-crumble crusts that seem to be most common.

I tinkered around a bit, looked at various recipes and eventually found something that might fit.

I had a hunch the fudge base wouldn’t do very well in the oven so I had to settle for a cold-bake cheesecake. My impression is that these aren’t as good as cheesecakes with egg in them, but considering how the piece of fudge I threw into the oven looked after ten minutes that was something I’d just have to live with.

All things considered I felt it worked out pretty well. Here’s how I did it:

The pan I used was roughly 30cm by 20cm, which I think corresponds to about 20″ by 12″ or so. I covered it on the inside with greaseproof paper, making it easier to lift the cheesecake in and out as needed.

Mix everything but the butter together in a bowl. I don’t have an exact measure for the Nutella, but what I did was I used a regular table spoon to dig up as much as I reasonably could with one go – a chunk about the size of a lemon, or maybe an orange (too much to put in your mouth at once.

Bring the mix to a boil and let it boil until the mix basses the Soft Ball Candy Test (This is someone else’s video, not mine (thanks though)).

The first time I did this it took me 35 minutes, because I was under the impression you had to simmer the mix. The second time I used turn the heat up full blast and it was done in less than ten minutes.

I stirred slowly the entire time the mix boiled, but I’ve heard that’s not necessary. Stirring for 35 minutes straight was kind of tiring though. I also read somewhere that you absolutely shouldn’t do it. The second time I still stirred a fair bit, but I wasn’t worried about it and left the mix alone several times to set things up for later.

When your mix passes the soft ball test, move it off the heat. I read somewhere that when you do this you have to stir the mix the entire time or it will burn and get stuck to the bottom of the pot. I did not test to see whether this was correct or not. If you want to take the risk, go ahead.

Once the mix has stopped boiling, stir in the chocolate. The mix will still be warm enough that the chocolate will melt within seconds.

Now comes the weird part, which I hadn’t heard about before (but maybe it’s news only to me).

Pour the mix from the pot into a stainless steel bowl. Put the bowl in a bath of cold water and stir with an electric mixer until the the mix becomes “fluffy and crumbly”. I guess the theory is that you stir the mix while cooling it off rapidly and that causes it to change consistency or something like that. Supposedly this is typical for English fudge. Either way, it seems to be good for the fudge, and that’s what matters.

Once you’ve got the mix to the right consistence, pour it into a pan/form of some kind and let it cool. I used a glass as a rolling pin to smooth it out a little and get a reasonably flat surface.

That’s it for the fudge base.

Mix all the ingredients together in a pot and bring to a boil. Let simmer for a while, ten minutes should be fine.

Essentially, this is the same as the fudge, only you don’t heat it up to pass the soft ball test. You just want it to boil together for a bit. I checked it by dripping about a spoonfull on a plate, letting it cool down and then tapping it with my finger. If it’s still soft and pliable, but not runny, that’s fine.

Once you’re happy with it, pour the toffee over the fudge. It should create a thin layer, perhaps two to three millimetres thick (maybe an 8th of an inch?).

Leave the fudge n’ toffee base to cool and start on the next bit.

I’m sure any soft-bake cheesecake filling will do, but here’s the one I made.

Mix the cream cheese and icing sugar together in a bowl. Keep stirring until it’s all one nice smooth cheesy mess.

In another bowl, whip the cream. Whip it until it begins to get thick. I got it to the point where the whisks make a clearly visible pattern in the cream, but where it’s still running enough that the patterns float together after a little bit.

To be honest, I do not know why you do it this way, but I read somewhere that that’s how you do it, so I did, and it worked.

Add the whiskey. With the amount of whiskey I used there was just a hint of taste, to let you know there’s something there. I was a bit careful as I was going to serve this up to my team at work and I wasn’t sure how fond everyone would be of whiskey.

Add chocolate chips. This is optional and I did it mainly for looks, as I thought it’d be a bit dull to have the plain white cream filling.

Spread the mix out on top of the base.

If you want, grate chocolate on top.

I left the mix in the fridge over night, but I couldn’t quite stop myself from testing so I cut a piece out of it after only about an hour (and it was fine).

Here’s how the end result looked: