I’ve had a bit of a dip when it comes to inspiration lately. I finished the third draft of Emma’s Story and sent it off to two people for feedback. I didn’t want to start anything new before I heard back from them so I haven’t done any “serious” writing for a while. The blurbs don’t really count.

Frank the Storm (Outside Nancy Spain’s)

Frank the Storm (Outside Tom Barry’s)

Frank the Storm (Outside Nancy Spain’s)

I’ve started working on a new short about Tuuli, the polar elf, but I’m not really feeling it. It’s not taking off like I was hoping. It’ll be short though, so I’ll keep at it and I’ll finish it, but it doesn’t really have me excited. then again, writing it anyway may be a good exercise.

The story about Tuuli got me thinking though. I originally wrote the first short about her almost five years ago, just when I started out writing. I did a rewrite of that specific story a few months back, to see how much I’d improved since back then. It was good fun.

Back then, when I just started out, I wrote a lot of short stories. I was really proud of them and I put them up on my wiki to share them with the world. Looking at them now, I see there’s room for improvement.

So why not improve them? 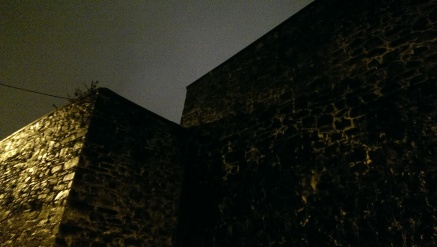 It should keep me occupied for a while, and it should give me enough ideas and inspirations for new stories to write. These characters mean a lot to me. I was really excited about writing their stories when I first started out and I’m now really looking forward to getting back to them to see what’s changed since last.

One of the story is about Enar, the protagonist of the novel I’ve written (currently on ice waiting for its second draft). I’d like to see if I can rework it as a companion story for the novel to help promote it.

All in all, I copied 22 old shorts from the wiki and put them into a folder on my hard drive for rewriting. This should indeed keep me busy for a while.