Today, I officially began work on the second draft of Emma’s Story. 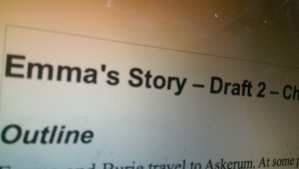 The first thing I did was to create a plan. I listed all of the changes I want to make to the story until I couldn’t come up with anything else. Once all these changes have been made and analyzed I’ll start polishing the actual text, and then I will hopefully be able to send the entire thing off to the editor.

I’ve actually contacted a professional to edit the story. I’m a little bit uncertain about whether that’s the right thing to do for me or not. I know the story (any story) needs editing, but I’m not sure paying a pro to do it is such a good idea – at least not at my current level. I figure it’ll be a learning experience though, just like everything else with this whole writing lark so far.

It should be fine. It’s a pretty short story and it won’t cost me my life’s savings.

That’s for later though. Before I can do that, I have some changes to make to my story:

And then, once all that is done, it’s time to do a polishing pass on the entire text and make sure it reads as well as it can. Then I’ll have coffee.

I Have A Plan